Below is a history of First Claremont between 1921 and 1927, written by George Peake, who was then Scoutmaster.

A pencilled note on the original copy of this document says Compiled at request of Headquarters in connection with the Chief Scout’s visit. Baden-Powell visited South Africa in 1926.

Amalgamation of 1st and 3rd Claremont into “The Claremont Troop” took place on 30 November 1921, owing to inability of obtaining Scouters, and decrease in the strength of both Troops. The Troop was then called “The Claremont Troop” and agreed to take no number. The Scoutmaster at that time was Mr. C.J. Hamilton (now our Rover Mate). The Troop lost Mr. Hamilton after a time, and had 2 or 3 other gentlemen as Scout Master at different times, sometimes carrying on without a S.M.

During 1924 the Troop dwindled down to a mere handful of Scouts with no Scoutmaster, meeting from time to time, just to keep the Troop from dropping out of existence. As no man was forthcoming as Scoutmater, an attempt was made by some of the Committee to disband the Troop, but this was defeated by the remainder of the Committee who took turns at attending meetings of the Troop.

In May 1925 I was persuaded to take over the Troop, I attended my first meeting with the Troop on 28 May 1925, when the total strength of the Troop was 12. On 4th June 1925 I had a re-organisation meeting when all the members of the Troop (12) turned up. The meeting place at that time was an old disused garage in the Main Road, Claremont.

Our first large camp was held in January 1926 at “Lourensford”, Somerset West, in conjunction with the Retreat & Lansdowne Troops, forming the “1st Lourensford Troop” with 30 members.

I was privileged to attend the Imperial Jamboree 1924, but that was whilst I was S.M. of 2nd Capetown Troop.

Some of the outstanding events in the Troop, since I have been with them, have been:

The present strength of our Troop is 2 Scouters, 10 Rovers and 30 Scouts. 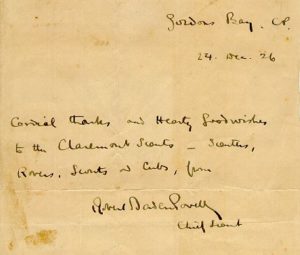 In December 1926 the Chief Scout and Founder, Robert Baden-Powell, visited 1st Claremont Scouts at the Rosebank showground in Cape Town, South Africa. Thanking them for their hospitality, he wrote:

Cordial thanks and hearty good wishes to the Claremont Scouts – Scouters, Rovers, Scouts and Cubs, from

Claremont’s first venue, from 1908 onwards, was in the Claremont Public School in Palmyra Road, where the first Scoutmaster, George French, was headmaster. In 1924 the troop was meeting in a disused garage in Main Road with a sawdust floor.

From 1916, land on the corner of Bowwood and Thelma Roads was leased, where our current hall stands. At the time, the land in the area was mostly vacant, so this was probably used as a Scout campsite initially.

In 1925, a new Scout Hall was opened in Bowwood Road by the Local Association. This hall was made of corrugated iron and stood where the top green of the Claremont Bowling Club is now.

The troop’s grounds were quite large in those days: in 1926, 17 patrols from the Cape Western Division camped in our grounds for the Gordon Shield competition. We came third, two points behind the joint winners, and the Lansdowne Troop, which was an offshoot of the Claremont Troop formed in 1925, came 5th. The first Gilwell Training Course for the Scout Wood Badge was also held in the grounds in 1926.