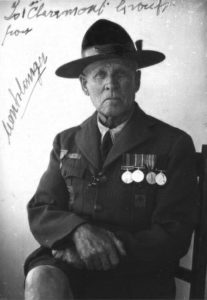 When he tried to register his Troop with Imperial HQ, he was asked ‘Why 2nd Claremont? There is no 1st Claremont.’ George French hadn’t bothered to register, and Umhlanga had to persuade him into doing so. In the mean time 1st Observatory, not far from 1st Claremont, had already registered, hence their claim to be ‘Primus in Africa’. But 1st Claremont still claims to be the first established Scout Troop, not the first registered. (1st Observatory closed in about 1995).

Umhlanga Baker was awarded the Silver Wolf in April, 1911, and remained active in Scouting for more than 40 years. He died in 1954.

Permanent link to this article: https://1stclaremont.org.za/our-history/umhlanga-baker/