Fred and Charles Stern – the first Scouts in South Africa

In 1907 in Cape Town, South Africa, two brothers at the Claremont Public School read about Baden-Powell’s new book Scouting for Boys in Pearson’s Weekly, and waited eagerly for the first installment. When it arrived on the bookstands, the brothers, Fred and Charles Stern, approached their headmaster, Mr George French, and persuaded him to become Scoutmaster of their Troop. The first meeting was held on 3 March 1908, and the 1st Claremont Scout Troop was born: the first Scout Troop in Africa.

George French’s son Cyril became Assistant Scoutmaster, and later took over running the Troop. Frederick Stern was the first Patrol Leader, and later Troop Leader, while his younger brother Charles was his ‘Corporal’. In 1908 when 1st Claremont was formed, Frederick was 16, and he became Assistant Scoutmaster in 1910. Charles was two years younger and became ASM in 1912. 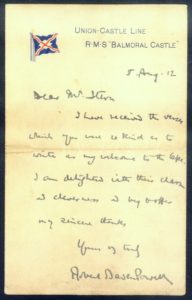 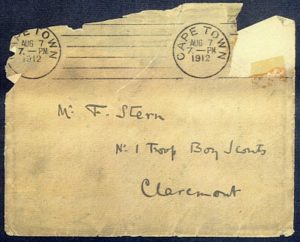 Both Fred and Charles recall camping and trekking across the Cape Flats, between Muizenberg and Somerset Strand. They also had the privilege of meeting the Chief Scout, Lord Baden-Powell, on his visit to Cape Town in 1912, where they were introduced to him as the first Scouts in South Africa. Fred wrote a poem welcoming B-P to South Africa and received a thank you note from the Chief Scout.

Frederick Stern went on to become a pastor in the Baptist Church in 1913, and worked as a circuit rider for 3½ years, preaching to African farmers and traders, during which he travelled more than 13000km. While a circuit rider, he revived a troop in Alice (Eastern Cape) which had died, where he was Scoutmaster and Chaplain.

He also founded the Bible Institute in South Africa. He later moved to the United States where he married (adding an ‘e’ to his name). Here he was pastor of many large churches in the New York state and president of the New York State Baptist convention. In 1968, in retirement, he was a Pastor in the Moon Lake Baptist Chapel in Holiday, Florida, USA.

Frederick Sterne started a troop in Huntington, Long Island, New York, when he was a pastor there from 1924-1933, and was also a member of the Suffolk County Girl Scout Council, and editor of their Yearbook. His church from 1960-1965, Kings Highway, Brooklyn, made its facilities available for a troop of Scouts and a Cub Pack made up of physically and mentally handicapped boys. In 1963, the 60th anniversary of his pastoral service, the troop presented him with a bronze statuette of a Boy Scout, mounted on a pedestal with a copper plaque inscribed ‘Rev Frederick H. Sterne, for a lifetime of Dedicated Service, Troop and Pack 529’.

Charles Stern (like Fred) was born in England and moved to South Africa in 1901. He too became a Baptist minister, chairing the Baptist Union of South Africa in 1936-1937 and again in 1953-1954. During World War II he was Senior Chaplain to the SA Armed Forces. In 1968 he was in Croydon, Surrey, England, a minister in the Movement for World Evangelisation.

Permanent link to this article: https://1stclaremont.org.za/our-history/fred-and-charles-stern-the-first-scouts-in-south-africa/