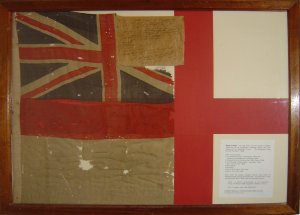 The flag flown at the first meeting on 3 March 1908

BP  first published Scouting for Boys in January 1908 in serialised form in England. By the end of February 1908, the first publication had reached the shores of the Cape Colony where two school boys, Fred and Charles Stern, read the article with avid interest and decided to ask their headmaster to launch a scout group. Charles and Fred were both pupils at Claremont Public School or, as it was commonly known, Frenchie’s school, after the headmaster, George French. Upon being approached George French agreed to launch the scout group, which met for the first time on 3 March 1908. The flag flown at that meeting is still on display in the hall.

The first camp was at Bolton’s Farm in Lansdowne Road, and many other camps and outings were held on the beaches of the Cape Flats. One of these outings was reported in the Cape Argus in July 1908. As the troop grew stronger and scouting became more established there were many camps and hikes, including what must have been a memorable 300 mile hike through the Cape mountains with mules and cart over a period of 3 weeks. 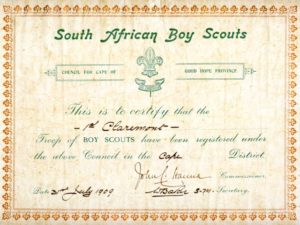 George French remained involved with 1st Claremont until 1920 when he retired. During this time he served on the Executive Committee for the Cape, edited the South African Scout and devised many scout games. In 1913 he was awarded the Silver Wolf by BP.

Cyril French, George’s son, became the scoutmaster at 1st Claremont in about 1913. He was born in 1886 in George Town, Southern Cape (now George). He was the second son of George and Bessie French.

When 1st Claremont was founded Cyril took on the role of Assistant Scoutmaster. He was warranted as Scoutmaster in 1913, taking over from his father and running the troop for several years. Later he went on to found the 3rd Cape Town Troop, and the two Troops held many joint activities in those early days.

He followed in his father’s footsteps in other ways, becoming a schoolmaster, and taught for a time at Wynberg Boys’ High School in Cape Town. He also inherited his father’s interest in nature, and spent much time searching the Fish Hoek mountains and sand dunes for snakes.

In 1927 he went to Australia to take over the Adelaide Snake Park. After only a few months he was bitten by a deadly tiger snake. He died the next day on 12 April 1927.

Apart from Fred and Charles Stern, we know little of the scouts from the early days. One of the first scouts we know about is Robert McKenzie who on 12 April 1909 was awarded the Silver Cross for Gallantry, for saving a swimmer from drowning. This was recorded in the March 1910 Headquarters Gazette, London, as below: 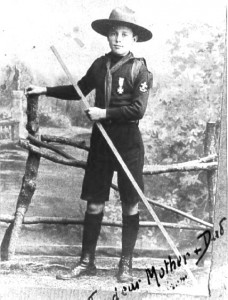 “I have the honour to thank you on behalf of Corporal H.Wickins, Scout McKenzie, Birkenberg and Seaton, for having awarded Life-Saving Medals to them, which were ceremoniously presented to them by His Excellency the Governor and Acting High Commissioner, on Sunday August 27th, at Government House. The four boys and myself, as their Scoutmaster, were presented to His Excellency by Captain Hanna, R.A. the President of the Council.

“The Movement is making good headway now. As a matter of fact I have just heard news from East London, where a Troop is being formed in the Junior Section, Y.M.C.A. and at Robin Island, where another is being formed. I intend going over there with some of my boys, to give them a start. “Those boys to whom Medals were presented belonged to the Claremont Division.

At a successful gymnastic display and entertainment which took place at a later date, Captain Hanna, R.A. referred to the pleasure he had had in presenting these four Scouts to the Governor.

He read a letter thanking the Patrols of the Claremont Division for their prompt turning out in force and scouring of the District in search of a little child who had strayed from home and could not be found. The extreme left of this search party came in touch with the child at Kenilworth, where a friendly hand had taken him up. The parents’ anxiety was removed and the child brought home.”‘

Permanent link to this article: https://1stclaremont.org.za/our-history/the-early-years/