John Solomon Clarke, known as ‘Eland’, was part of our Troop’s first team to win the Gordon Shield, in 1934. He went on to be Scoutmaster and Group Scoutmaster in our Troop until his retirement in 1981. 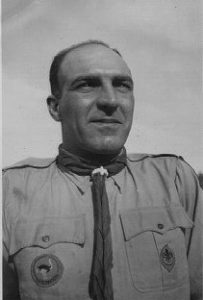 John Clarke joined 2nd Claremont Group as a Cub on 17 May 1930, transferring to 1st Claremont after a few years. He was successively Cub, Scout, Rover, Assistant Scoutmaster, Scoutmaster and Group Scoutmaster of that Group and for a short while an Assistant District Commissioner, an appointment from which he extricated himself to return to 1st Claremont.

A cheerful, friendly man of great humanity, he was always willing to help anyone who needed help. Essentially a “hands-on” man, Johnny gave his Scouts a wide training both for life in general and practical “do it yourself” in particular – many ex-Scouts have cause to be grateful not only for the Scout training they received but also for his teaching of the essential practicalities of electricity, plumbing and much else. He also produced, seemingly without effort, new and constructive programmes for his Troop meetings (of which there were two weekly throughout the year). His services to Scouting were recognised by the award of the Silver Protea in 1976, while in 1981 he received a 50 Year Bar to his Long Service Medal. But his greatest memorial will surely be to be remembered with great affection and respect by former 1st Claremont Scouts (and many others in the Movement) in all walks of life, and in at least three continents, who are proud to say “I was one of John Clarke’s Scouts”.

Outside scouting, John was a leading Freemason and indeed his life exemplified all that is good in Scouting and Freemasonry. John is survived by his wife Peggy, a son, daughter, step-daughter and grandchildren, to whom we in scouting extend our warm sympathy – with them we mourn the passing of a truly great Scout.

Permanent link to this article: https://1stclaremont.org.za/our-history/john-eland-clarke/